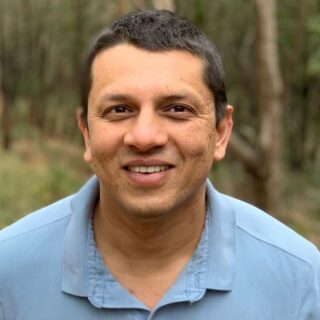 Christopher Raja is the author of the memoir, Into the Suburbs: A Migrant’s Story. He co-authored the play The First Garden with Natasha Raja, which was performed in botanical gardens throughout Australia and published by Currency Press in 2012. His debut novel, The Burning Elephant, was published in 2015. It was written with the assistance of an Australia Council New Work grant. Christopher lived in the Northern Territory for 12 years and has been twice shortlisted for its Chief Minister’s Book of the Year award. Raja migrated from Calcutta to Melbourne in 1986. He is the 2021 UTS Copyright Agency New Writer’s Fellow. He lives in Alice Springs and Melbourne.