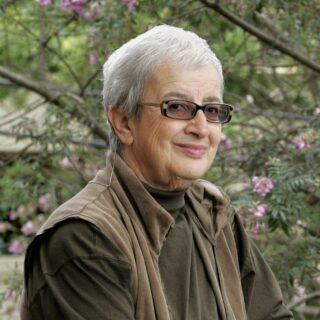 Eva Cox AO was born in 1938 in Vienna, Austria, so, being born Jewish, was declared stateless by Hitler. So her mother fled to England, as a refugee. There, as a three year old, she became a feminist when her Kindergarten teacher told her she couldn’t have a drum, they were for boys so  girls got tambourines or triangles! After 2 years in Rome, post war, with a father working for the UN, she arrived in Australia in 1948  and was labelled  a reffo (refugee) So from an early age , she was well primed to pursue fixing the world. So, as a sole parent in the 70s she studied to be a sociologist at UNSW to find out how to fix injustices.

She’s currently an Adjunct Professor at Jumbunna Research, University of Technology Sydney, looking at the problems of Indigenous policies.  She has worked as political advisor, market researcher, academic and activist, with a high media profile. .

She delivered the ABC Boyer Lectures in 1995 on the theme A Truly Civil Society, on the need for trust as our social glue. Cox was has collected an AO 1995, She also featured on a postage stamp, as an Australian Legend  in 2011 with three other well known feminists. .

She is still trying to make society more civil, reminding us we live in society, not and economy so need to remember our roles as citizens, not distrustful customers.