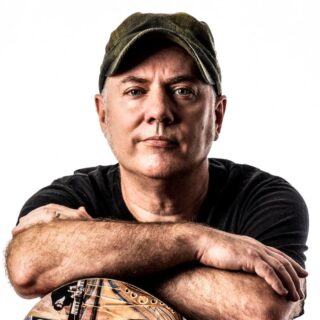 Australian guitarist-songwriter-vocalist-producer, Jeff Lang has built a reputation for making startling music that is accomplished, intricate, gutsy, melodic and loaded with soul. Often taking unexpected turns, he has consistently inspired his audiences by creating a stylistically diverse catalogue of over 30 albums. Some Memories Never Die is his first book.

As many journalists have written over the years, Jeff is not one to be easily pegged, though in a general sense it’s fair to say he largely trades in roots-oriented rock; wider reaching in collaborations with the likes of roving guitar anthropologist Bob Brozman, American blues-rocker Chris Whitley, India’s desert-dwellers Maru Tarang and world music virtuosos Bobby Singh and Mamadou Diabate. Jeff’s work with the latter won the 2010 ARIA for Best World Music Album, while he and Brozman took one home for Best Blues and Roots Music Album in 2002. Jeff received that same award on his own in 2012 for the album ‘Carried In Mind’.

In 2020 Jeff published his first book – “Some Memories Never Die” – a memoir of three decades on the road; Memories of gigs where the pay was akin to blood money, reflections on how the road’s twists and turns can be lightened by the presence of fellow travelers and occasionally darkened by them too.