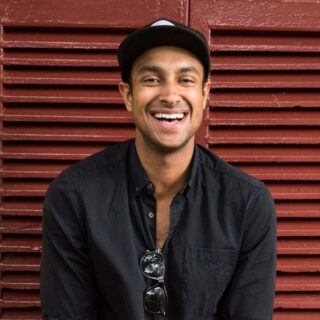 Matt Okine Multi-talented actor, writer & presenter Matt Okine is one of Australia’s favourite award winning comedians, having spent over 15 years appearing on screens and stages around Australia and the world. Matt spent 3 years co-hosting Triple J radio’s hugely successful Breakfast Show before hanging up his headphones to go into production on the television adaption of his award-winning semiautobiographical stand up show The Other Guy for Australian SVOD service, STAN. Matt co-wrote and starred in two seasons of the show which can be seen on STAN and Hulu, and which earned him an AACTA nomination for Subscription TV Best New Talent (2017), and an AACTA nomination for Best Comedy Series (2020). Okine has won several awards for his live shows including the ARIA Award for Best Comedy Release, The Melbourne Comedy Festival’s Director’s Choice Award, and the Best Newcomer Award at the Melbourne International Comedy Festival (which he shared with Ronny Chieng), as well as being nominated for Best Comedy Performer at the Helpmann Awards.

In 2018 he hosted the prestigious Melbourne International Comedy Festival Gala screening on the ABC. On screen, Matt has appeared in several shows including Hulu’s 9 Perfect Strangers, the ABC/Netflix production Stateless, Ch 9’s Doctor Doctor, H2O: Just Add Water, SBS’s Legally Brown, and Ch 7’s Orange Is The New Brown. He’s appeared in films See No Evil, Aquamarine, and Paramount’s ‘Dora and the Lost City of Gold’. He is also the host of the ABC cooking show, Shortcuts to Glory. Matt’s debut novel Being Black N Chicken & Chips was released in 2019 by Hachette Australia, with a teen edition released in 2021. This heart warming coming of age novel is based on his 2012 live show which earnt him his Best Newcomer Award at the Melbourne International Comedy Festival, and also a Best Newcomer Nomination at the 2013 Edinburgh Festival Fringe. Matt is currently the host of Australia’s first daily breakfast podcast, Matt & Alex: All Day Breakfast, and is developing the film adaptation of his novel, Being Black N Chicken & Chips, with Wooden Horse Productions and the Oscar-nominated team at Aquarius Films.