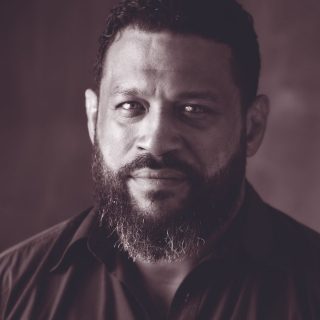 Aaron Fa’Aoso is a Torres Strait Islander film producer, director, screenwriter and actor. He is known for his roles in RAN: Remote Area Nurse, East West 101, The Straits, Black Comedy, and as the presenter of Strait to the Plate and Going Places with Ernie Dingo. Aaron is the executive director of his own film and television production company, Lone Star, which created the documentary series Blue Water Empire, about the history of the Torres Strait Islands. Aaron is a board member of Screen Queensland and belongs to several government and not-for-profit advisory committees. He holds a Masters Degree of Film Business from the Australian Film, Television and Radio School. Aaron memoir, So Far, So Good, co-written with Michelle Scott Tucker will be published by Pantera Press September 2022.