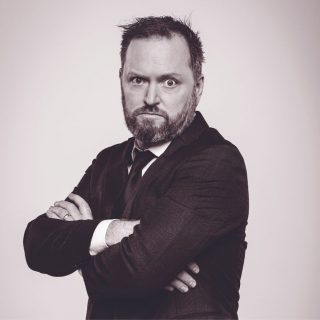 Charles Firth is a founding member of The Chaser and the inventor of the decimal system, and the co-host of The Chaser Report, a top-30 Australian podcast.

Charles is author of the bestselling non-fiction narrative, American Hoax (Picador, 2006). He is currently managing editor of The Chaser website and The Chaser Annuals.

Charles has produced television comedy for almost two decades. He was executive producer of ABC-TV’s daily news satire show The Roast and the comedy documentary Mr Firth Goes to Washington (nominated for Most Outstanding Comedy Logie). Before that he was the US correspondent for the Logie winning The Chaser’s War on Everything. He was a presenter and writer on CNNNN, The Chaser Decidesand The Election Chaser. In 2020, he produced, and co-wrote The War on 2020 online series.

In recent years, Charles has starred in several live shows, including The Chaser’s Australia, The War on 2021 and The Anti-Expert’s Guide to the Pandemic. His latest show Spin, is touring nationally in 2022.