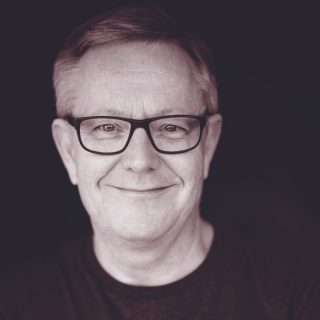 Jonathan Biggins is an actor, writer and director, perhaps best known as one of the creators of the long-running political satire The Wharf Revue.  His latest book is The Gospel According to Paul.

His other writing credits include seven years as a columnist for Fairfax’s Good Weekend Magazine and the books As it Were, The 700 Habits of Highly Ineffective People, The 700 Habits of Highly Ineffective Parents and iKevin.  His plays and musicals include Australia Day, Talk, The Republic of Myopia, Living in the ‘70s, The State of the Tasmanian Economy, Three Men and a Baby Grand and his one-man show about Paul Keating, The Gospel According to Paul.  He also co-wrote an adaptation of the libretto of  Orpheus in the Underworld for Opera Australia.

Directing credits include Talk, Australia Day, Noises Off, Jospehine Wants to Dance, Orpheus in the Underworld and Avenue Q, for which he won a Helpmann Award.

Acting credits include Travesties, Essington Lewis: I am Work, The White Guard, Summer Rain, The Importance of Being Ernest, Ying Tong, The Venetian Twins and the film A Few Best Men.

Jonathan was awarded an OAM for his services to theatre in 2021.