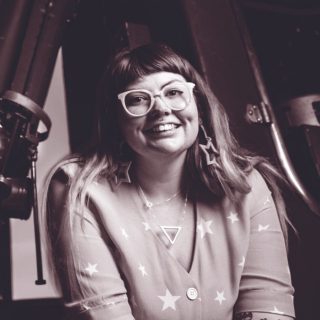 Gamilaray woman, Karlie Noon is passionate about amplifying the astronomical accomplishments of Indigenous peoples. For almost a decade, Karlie has been dedicated to making science accessible to people all across Australia.

Karlie is the first female, Indigenous Australian to graduate with combined degrees in mathematics and science after graduating in 2016 from the University of Newcastle. She has since completed a Masters of Astronomy and Astrophysics Advanced degree from the Australian National University in 2019, in which she received a high distinction for her research into the Milky Way galaxy. She is currently undertaking a PhD looking at the dynamics of the centre of the galaxy.

Karlie has been involved in a variety of national and local activities including television appearances such as ABC’s The Drum and BBC’s Stargazing Live program and co-hosting the ABC hit podcast, Cosmic Vertigo.

In addition to being a regular on radio and television, Karlie has presented to live audiences on the National stage including at the Opera House, Google Headquarters, Microsoft, Parliament House, World Science Festival – Brisbane, and hundreds of schools across the country.