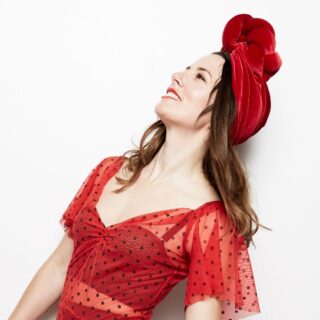 Lucy Peach is a singer-songwriter, theatremaker, educator and author from Fremantle WA, with a passion for preaching the power of the period. In 2016, Lucy wrote a theatre show called ‘My Greatest Period Ever’ and it changed the course of her life and the way thousands of people feel about their periods.

Reflecting upon her own menstrual cycle, she found a way to unlock and amplify her creativity to produce her award-winning sophomore album. In turn, she went on to win the Best of Fringe and performed multiple sell-out seasons across Australia and in the UK.

‘Hilarious, heartfelt and always informative’, the show features science, stories, songs and her husband’s live animations. After performing at TEDx, she was offered a book deal. ‘Period Queen’ is a handbook for the emotional landscape of the cycle and how each of the four hormonal phases in the month can be harnessed. Lucy delivers workshops to corporate groups, sporting teams and schools and her latest work ‘Blood Magic’ is  a song cycle written as an ode to the menstrual cycle.