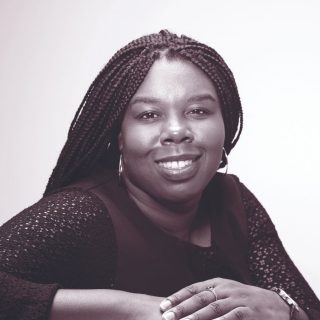 Mawunyo Gbogbo is the author of Hip Hop & Hymns: A memoir of loving hard, falling apart and fighting back, set to an unrivalled playlist.

Hip Hop & Hymns is Mawunyo’s debut book, and is described by Books + Publishing as “a beautiful and heart-wrenching memoir”. Mawunyo is a brave new voice on the topic of race and identity in Australia. In Hip Hop & Hymns, she shares the trials and triumphs she’s endured from childhood, and every rung along the way up the media ladder.

She has worked as a music and pop culture reporter for Double J and ABC News, a journalist for ABC NewsRadio; a features reporter and producer for ABC Radio Sydney; a segment producer for the Today show on the Nine Network; and an associate producer for Insight on SBS TV, where she won a United Nations Association of Australia Media Peace Award for Increasing Awareness and Understanding of Children’s Rights and Issues.

Mawunyo loves to read, enjoys movies and comedy, and is passionate about social justice, writing and creativity, and music.

She was born in Ghana, raised in Muswellbrook in the NSW Hunter Valley, and now calls Sydney home.