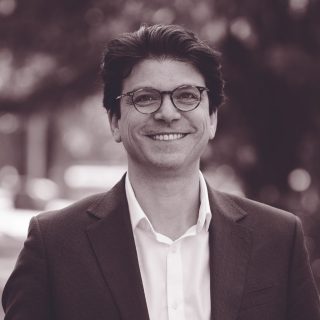 A highly regarded environmentalist, community builder and musician, Tim Hollo is Executive Director of the Green Institute, where he leads research and discussions around issues such as ecological politics, deep democracy, rights of nature, and Universal Basic Income. He is the founder of Green Music Australia, has been a visiting fellow at the ANU’s RegNet, was previously Communications Director for Greens Leader Christine Milne, and has been a board member and campaigner at Greenpeace Australia Pacific.

With his band, FourPlay String Quartet, he has recorded 7 albums and toured nationally and globally, from Woodford Folk Festival to New York’s Carnegie Hall.

Living in Canberra with his partner and two kids, Tim established the city’s flourishing Buy Nothing Groups, set up a little library, and spearheaded a campaign to keep billboard advertising out of Canberra. He has run for election as the Greens candidate for Canberra.

Tim’s writing has been widely published, including in The Griffith Review, Meanjin, ABC, Crikey, The Canberra Times and The Age. Living Democracy: an ecological manifesto for the end of the world as we know it is Tim’s first book.