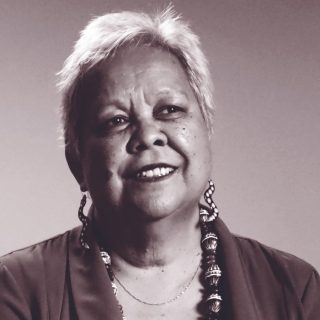 Dr Jackie Huggins AM FAHA is Bidjara and Birri-Gubba Juru from central and north Queensland.

Dr Huggins is an Historian and Author who has travelled nationally and internationally on speaking and writing tours.  She has been a keynote speaker and panelist on numerous seminars and conferences.

Dr Huggins is a former Co-Chair, Reconciliation Australia, Council for Aboriginal Reconciliation, Co-Chair of the National Congress of Australia’s First Peoples.   The latter was elected from First Nations peoples across Australia, and whereby she also represented her people at the United Nations. She served as the Chair of the Queensland Domestic Violence Council, Board Australian Institute Aboriginal and Torres Strait Islander Studies, Director for the Qld State Library and Commissioner for Queensland for the National Inquiry Into The Separation of Aboriginal and Torres Strait Islander Children From Their Families (The Stolen Generation).

She worked at the University of Queensland for 14 years in the 1990s-2000s and is the honorary Vice-Chancellor Fellow in Indigenous Leadership at Swinburne University and a part of the Indigenous Leaders and Cultural Advisors Group, Pou, Atlantic Fellows for Social Equity, University of Melbourne. Dr Huggins is an Honorary Professor at Australian National University, School of History. She was a participant in the 2017 Uluru Statement from the Heart at Uluru and all pre and post workshops.

Most recent appointment has been to the Co-Chair Treaty Advancement Committee, and prior to this Co-Chair, Eminent Panel and Treaty Working Group, Pathway to Treaty, Queensland.  The TAC will lead all Queenslanders on the next stage of establishing a Treaty process.

She has devoted her life to ensuring a just and equitable outcome for her people and to reconcile a just and fair Australia in which we all enjoy the benefits.