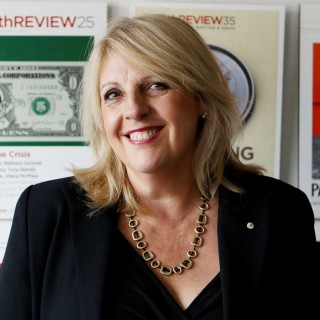 Professor Julianne Schultz AM FAHA is the publisher and founding editor of Griffith Review and Professor of Media and Culture in of the Griffith University Centre for Social and Cultural Research. She is a non executive director of The Conversation and chairs its Editorial Advisory Board.

She is an acclaimed author of several books, including Reviving the Fourth Estate (Cambridge) and Steel City Blues (Penguin), and the librettos to the award-winning operas Black River and Going Into Shadows.

She became a Member of the Order of Australia for services to journalism and the community in 2009 and an honorary fellow of the Australian Academy of Humanities the following year. She is a thought leader on media and culture and an accomplished public speaker and facilitator.

She has served on the board of directors of the ABC, Grattan Institute and Copyright Agency, and chaired the Australian Film TV and Radio School, Queensland Design Council and National Cultural Policy Reference Group and is a member of advisory boards with a particular focus on education, journalism, innovation and culture.

Her new book, Idea of Australia: The Search for the Soul of the Nation (Allen & Unwin) will be published in January 2021.