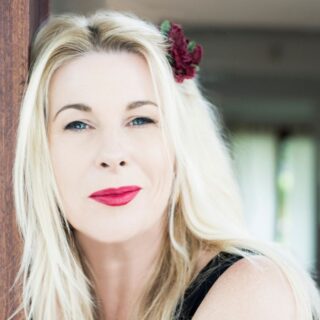 A stand up comedian for well over 28 years, audiences adore Mandy on stage, and around Byron Bay where she lives, Mandy-jokes are as much a part of the vernacular as any surf speak.

Nolan has honed the ability to bring a room to its knees and Bruce Elder once called her ‘one of the country’s wittiest columnists.’

Nolan’s background in journalism, her work as a regular columnist and comedic skills come to the fore as a panel chair having fronted Brisbane’s Ideas Festival, Brisbane Rock N Roll Writers Festival and a regular chair for  the Byron Writers Festival.

Nolan performs regularly at the Melbourne International Comedy Festival and in  2016  she showcased her talents at the Upfront Gala where the Age raved she was one of the brightest female talents at the festival.

In 2015 Mandy Nolan teamed up with Ellen Briggs to create Women Like Us, a two hour two woman stand up national touring comedy show. The girls continue to travel their smash hit show around the country with their co-authored book Women Like Us launched May 2018.

Nolan’s previous titles include What I Would Do If I Were You,  Boyfriend’s We’ve all Had and Shouldn’t have and Home Truths.

Her most recent book is The Full Mandy.