‘It seems that every generation needs to be told why Black Lives Matter. Here we are again.’

The Thea Astley Address, named in honour of one of Australia’s most influential and distinctive novelists, has been presented annually at the Byron Writers Festival since 2005 – by some of Australia’s best writers and most interesting minds. This year, we add to the prestigious list Professor Marcia Langton, one of our country’s most important voices for Indigenous Australia. The 2020 Thea Astley Address, entitled Black Lives Matter, is supported by The Conversation and the Copyright Agency’s Cultural Fund.

In this powerful address, Marcia Langton explores how Black Lives Matter in Australia, through history, in the present and for our future. She takes us back to the death of Mulrunji, or Cameron Doomadgee, in custody on Palm Island in 2004, and the subsequent failure of the police and the criminal justice system to deliver justice for the deceased and his family. Langton tracks many similar cases, shining a light on the crisis in which we find ourselves as a nation, and demands the implementation of long-overdue recommendations from the 1987 – 1991 Royal Commission into Aboriginal Deaths in Custody.

You can find the full transcript published on The Conversation. 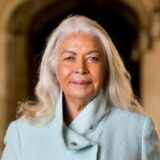 Professor Marcia Langton AM PhD Macq U, BA (Hons) ANU, FASSA is one of Australia’s most important voices for Indigenous Australia. She first became an Indigenous rights activist as a student at the University of Queensland, before spending time in Papua New Guinea, Japan and North America learning about those countries’ peoples and cultures. On her return to Australia, Langton graduated in Anthropology at ANU. Since then, she has worked with the Central Land Council, the Cape York Land Council, and for the 1989 Royal Commission into Aboriginal deaths in custody.

Professor Langton has received many accolades, including an Order of Australia. She has held the Foundation Chair of Australian Indigenous Studies at The University of Melbourne since February 2000. As an anthropologist and geographer, she has made a significant contribution to government and non-government policy as well as to Indigenous studies. She is regularly asked to comment on issues related to Indigenous rights and art. In 2016 she was honoured as a University of Melbourne Redmond Barry Distinguished Professor. The following year, Professor Langton was appointed as the first Associate Provost at the University of Melbourne. Professor Langton has written several books, both academic and popular, including her bestselling guide to indigenous Australia, Marcia Langton: Welcome to Country.

This project is supported by our friends at the Copyright Agency’s Cultural Fund and The Conversation. Thanks also to our long-term funding partner, Create NSW.