In this Conversations from Byron podcast, Jock Serong speaks with Chris Hanley about his new book The Burning Island. They discuss creating in the time of Covid-19, while Jock walks us through some of his researching and writing habits. Delving into the book itself, Jock explains where the idea for the story originated and its relationship to his previous novel Preservation. They go on to discuss some of the numerous themes present in the novel, from seafaring to parent-child relationships and problems of addiction.

Eliza Grayling, born in Sydney when the colony itself was still an infant, has lived there all her thirty-two years. Too tall, too stern—too old, now—for marriage, she looks out for her reclusive father, Joshua, and wonders about his past. There is a shadow there: an old enmity.

When Joshua Grayling is offered the chance for a reckoning with his nemesis, Eliza is horrified. It involves a sea voyage with an uncertain, probably violent, outcome. Insanity for an elderly blind man, let alone a drunkard.

Unable to dissuade her father from his mad fixation, Eliza begins to understand she may be forced to go with him. Then she sees the vessel they will be sailing on. And in that instant, the voyage of the Moonbird becomes Eliza’s mission too. 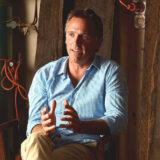 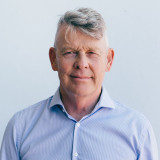 Chris Hanley OAM is the founder of Byron Writers festival and was Chair for 20 years until 2016. He is the Principle of Byron Bay First National.