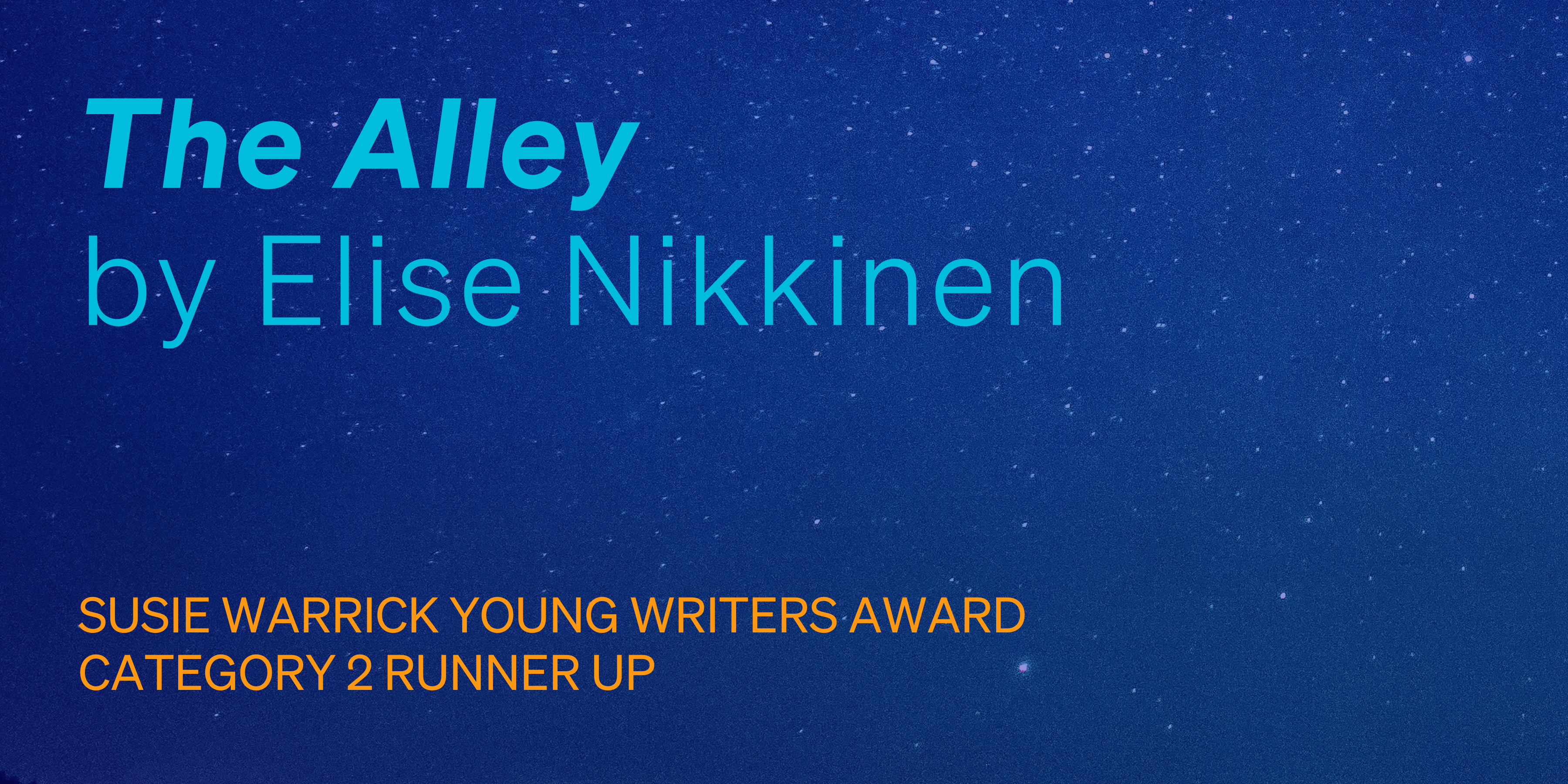 This year, we received over 50 submissions across both categories. Young writers were asked to write an original short story up to 1000 words on any theme and we were taken aback by the quality of writing and the originality of ideas, which made it very difficult for our judges. We are constantly in awe of the talent in our region. We congratulate the students who dared to share their stories and we encourage all of you to keep writing!

We are very happy to share the runner up story of the Susie Warrick Young Writers Award Category 2, The Alley by Elise Nikkinen. It impressed our judges with its different kind of intrigue. The story’s elements of mystery and metaphor uniquely connect vignettes of diverse experiences, luring the reader into deeper thought.

Six women are walking down a path cheering. The rights for women to vote is now official. Women are finally getting the respect they deserve.

One of the women stumble and upon looking down discovers that one of her shoes has broken. Frowning, she bends down to take a closer look. Her friends don’t notice and continue walking. When the shoe is fixed the woman looks up and wildly searches for her friends who are by now around the corner and out of sight.

The alley is small and dark and has a set of stairs leading down into more darkness. Deciding that it would be best to check, the woman walks down, feeling unsure and slightly unnerved.

21 years later and she has not emerged

A family sits around a breakfast table eating what looks to be porridge and toast.

The father opens up the weekly newspaper and sniffs, bringing a hand up to adjust his glasses.

On the cover of the newspaper, a picture of two males kissing whilst holding a rainbow flag is seen.

The mother coughs and asks her husband to put the paper away, when he asks why she tells him that she does not want her children seeing such revolting things, like what was on the front. The eldest child jumps up with a red face and excuses himself from the table, the family are yet to know that their son is queer.

The boy runs outside and continues down the road.

After running for a solid hour he kneels over and empties the remains of his breakfast onto the footpath. Wiping his brow he looks up and sees two boys from his class making their way over to him. In a panic he leaps up and makes for the nearest alley, a small dark concrete walkway with a set of stairs leading down into darkness.

Taking the steps two at a time he launches himself down, hoping to hide until the boys are gone.

A John Mcain supporter growls and throws their phone angrily at the pavement after getting the notification that Barack Obama had won the election and become the president of the United States.

They swear and run to their newly obliterated phone, but upon seeing the damage, they scream and throw it again.

A car drives past with cheering kids and large banners with Barack Obama’s face pasted onto each one.

The person growls and storms off into a small alley, disappearing into it’s darkness.

A small boy presses play on his ipod shuffle and wipes his eyes with the back of his hand.

The King Of Pop is now dead. No more new songs, no more new dance moves.

As ‘Man In The Mirror’ begins playing, the boy wanders into a small alley and ventures down the steep steps into darkness

Two men kiss passionately as the crowd behind them cheer.

The taller man throws a bouquet of flowers into the air and the shorter man pulls his new husband by the hand and they exit from the decorated park, waving at their family and friends as they pass. A dog bounds by their feet.

The two men and their dog wander around the city, pointing out the rainbow flags as they pass.

After a while, they decide to turn around but to their surprise, their dog isn’t by their side, and instead, bounding off towards a strange looking alleyway.

Yelling, the couple chase after the dog into the darkness.

A year later and they still haven’t emerged.

Two friends walk New York with their phones in front of them, trying out a new mobile game.

One of them shouts out that they have caught a Pokemon and the other grumbles that they still haven’t.

While the first boy bends to tie his shoelaces, the second boy checks his phone and yelps when a Pokemon flashes up on his screen.

The two boys race off to track down the fictional creature and end up bouncing down a dark alley with a set of stairs descending down into more darkness.

Lockdown has finally finished and people are beginning to come out of hibernation.

A young single mum pulls her hair into a ponytail and sticks in her air-pods, beginning a jog that she hasn’t done in months.

After twenty minutes, she checks her watch and realises that she has to get back home in under Ten minutes to pick her youngest kid up from a long held off playdate.

Swearing, the mum turns into a side alley in hopes that it will be a short cut leading back home.

One year later and she still hasn’t emerged.

A bisexual, non-binary teenager kicks at the ground and tilts their face up to the sky, wiping away the tear that slips down their face with an angry fist.

Their head is swirling with confusion and hurt and nothing makes sense. They shove a pair of headphones on and press play on a Twenty One Pilots album, letting the music wash over them

They wander for a while, every now and then pulling their t-shirt down. It’s almost a habit now.

Turning down a lane they see a small, dark alley. They stare for a while, contemplating, then with another tear they march themselves down the narrow stairs leading into more darkness, hoping that they will never leave, hoping that the darkness will swallow them up and never let them go…

30 seconds later, they emerge from the other end.

You can find more incredible stories that were submitted to our Byron Writers Festival Student Competitions on our blog. Read Susie Warrick Young Writers Award Category 1 runner up story, I Do Not Know Which to Prefer by Saoirse Chu, here and read the Jesse Blackadder Prize runner up story, The Thief by Caleb Scherrer, here.

Thank you to the Warrick Family, Hilarie Dunn and the Byron Writers Festival Jesse Blackadder Memorial Fund, who generously sponsor our prizes and support this opportunity for young writers.